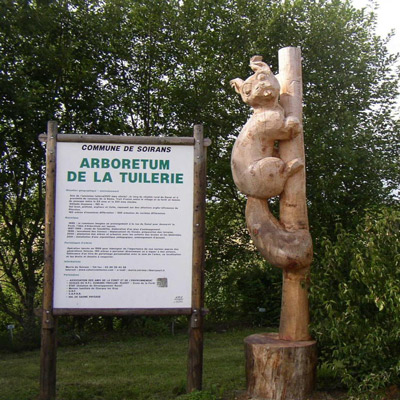 Located on the site of an old Tile manufacturer, along the rural path of the Canal, near the Dame stream, coming from the Mondragon Forest, a link between the village and the forest.

Created in 2000, it bears witness to the transition between the XXth and XXIst centuries. The Tile factory arboretum was designed, chosen and created by the Soirans Town Council in partnership with the Association of Friends of the Forest and the Environment and the schools in the RPI Soirans-Pluvet-Tréclun.

A natural monument of modern times, the Arboretum de la Tuilerie contributes to the animation and promotion of our village and its environment. The trees that were planted, attached to a land that our forefathers used to make tiles and bricks, are living witnesses for the future generations of the importance of our roots, bringing hope and looking to the future. A link between the village and the forest, but also witnesses of the transition between the XXth and XXIst centuries, the Arboretum de la Tuilerie showcases an openness to the world through the variety of the trees planted there. The species were decided on according to the climatic requirements of our region, the existing forest heritage, the nature of the soil and the available spaces. The planting works were carried out in February and March. Schools and the population have joined this important phase of the project. The gesture of planting is an enriching and symbolic one, which made it possible to demonstrate a citizen awareness and a responsibility towards a common heritage to be passed on. 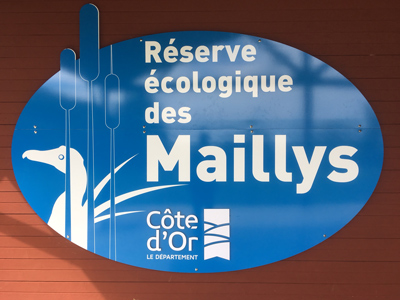 The Maillys Ecological Reserve is a place of observation, awareness and education about the environment. An educational observation trail has been created to discover the typical fauna and flora of the Val de Saône.

More than 150 bird species have been observed. In winter and migratory periods, this former aggregate extraction site is a haven for waterfowl: great egrets, mallards, coots, teals, common pochards, duck and gadwall.

ON THE SAME TOPIC :

By continuing your visit to this site, you accept the use of cookies in order to remember your preferences and collect statistical data. More information.